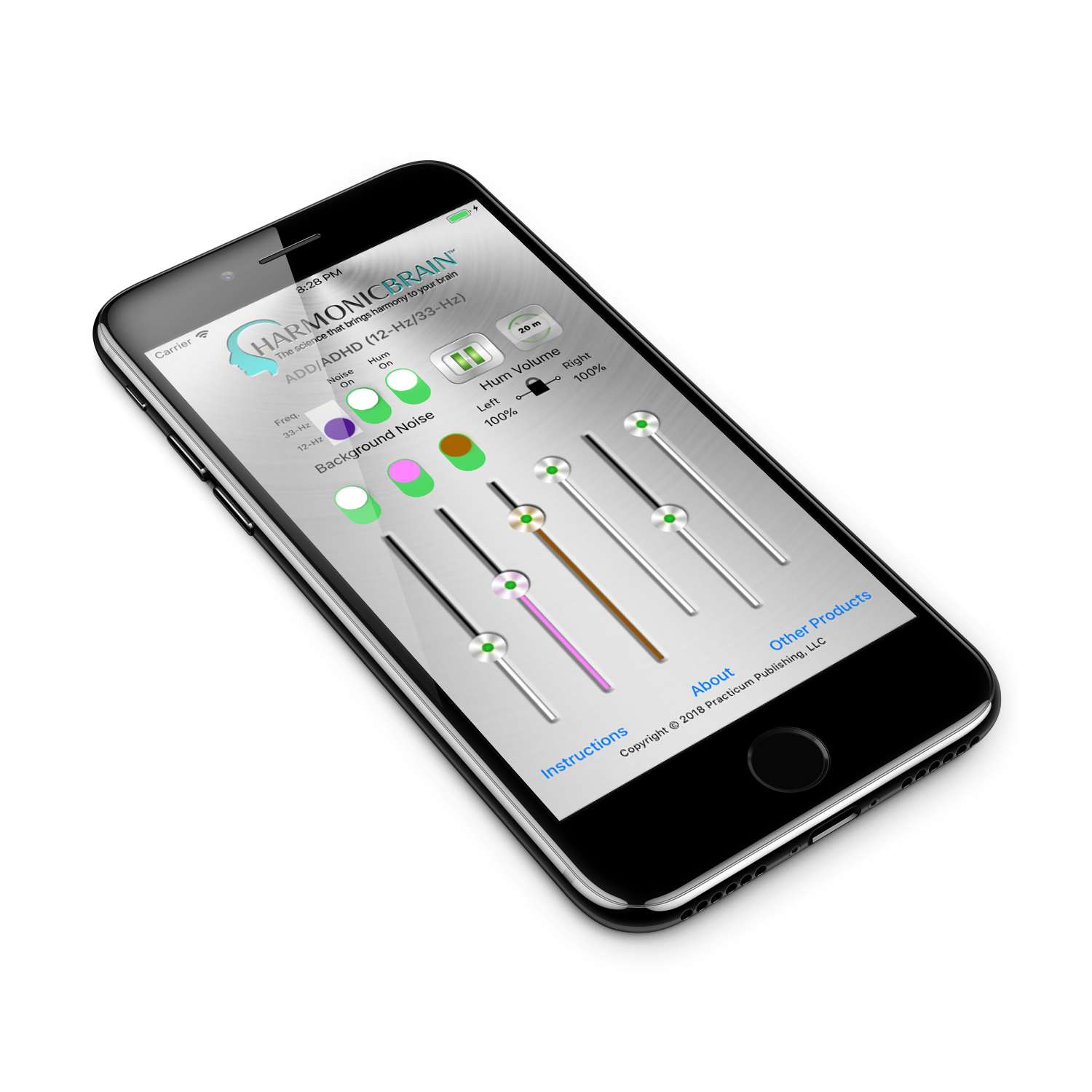 HarmonicBrain ADD/ADHD is a research-based app specifically designed to improve focus, attention, and on-task performance by increasing beta brainwave activity in those with ADD/ADHD. HarmonicBrain ADD/ADHD provides all four of the improvement methods discovered by ADD/ADHD researchers and clinicians: two frequencies to increase beta (low and high beta), white/pink/brown noise (found to increase attention and concentration), and background operation (so users can play their own music/videos/etc. during HarmonicBrain sessions).

EEG studies found that children with ADHD have decreased beta brainwave activity compared to children without ADHD when measured during cognitive tasks as well as during the Continuous Performance Task (CPT) protocol.

Researchers and clinicians, using binaural brainwave entrainment (like that of HarmonicBrain ADD/ADHD), were able to increase beta brainwave activity of children with ADHD. This increase improved the children’s performance in attentional tests.

Other researchers found that white noise (like that of HarmonicBrain ADD/ADHD) also improved attention scores of children with ADHD but worsened performance for attentive children.

In separate studies, participants who listened to music of their own choice, lowered their anxiety levels.

Researchers also found that children with ADD/ADHD has “significantly higher attentiveness levels” after brainwave entrainment. Another study found subjective improvements in attention and focus but that study made use of music selected by the researchers rather than by the study participants. Because HarmonicBrain is designed to let you select your own music (or any audio, video, white/pink/brown noise, or even no adjunctive sound), you can avoid the issue of “canned” music.

Get the most from HarmonicBrain:

“Method: Quantitative electroencephalography (QEEG) was performed at open eyes and during performance of the Continuous Performance Task. Results: Children with ADHD showed an altered pattern of QEEG activity, especially during the attentional load task, with increased slow cortical activity (mainly over the frontal areas) and decreased fast cortical activity.”

“The lack of beta activation during cognitive tasks (requiring focusing and concentration) may reflect a decreased cortical arousal from subcortical centers in premotor and prefrontal regions.”

“The children with ADHD also showed reductions in the relative beta power in frontal, parietal, and temporal regions during open eyes and during performance of VT.”

“The lack of beta activation during cognitive tasks (requiring focusing and concentration) may reflect a decreased cortical arousal from subcortical centers in premotor and prefrontal regions.”

“…white noise seems to be a stimulation that might be able to stabilize performance variability in subjects.”

“Consistent with the model, our data show that cognitive performance can be moderated by external background white noise stimulation in a non-clinical group of inattentive participants.”

“The possibility that attention can be improved by the addition of carefully controlled levels of white noise into ones [sic] environment is potentially of major practical significance. Currently ADHD children are treated successful with medication, where environmental stimulation could be seen as a complementary method to deal with inattentive problems. This could be of particular importance for the significant population of parents that are uneasy about the use of medication.”